IntelliBox IP is an intelligent control unit between the alarm system and more fog cannon units.

The box helps to facilitate monitoring and servicing of the system centrally.

• Control unit for easier installation and service – and for wireless control

• You get access to the fog cannon installation via IP/internet. You can monitor the installation as if you were present. It is especially relevant when installations are high up, and at considerable distances apart

Reviews
Be the first to review this product!
More rating and write review
SPECIFICATIONS

• Simple “Plug & Play” setup and connection between the fog cannon units and the IntelliBox. Push only one button to include a fog cannon

• IP-connection for remote communication via the internet/IntelliSuite whereever in the world the alarm installer is:

• Changing the setup is possible via IntelliSuite. IntelliSuite reports technical information about each fog cannon included in the system (requires a password is of the technician)

Only the latest documents can be downloaded. Therefore, there may be a discrepancy between already printed and downloaded materials. 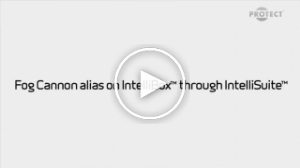